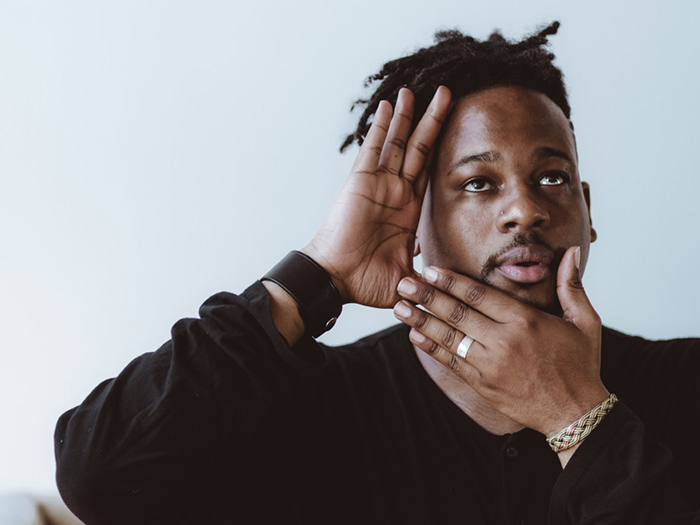 Novelist Tom Robbins once said, “Humor is both a form of wisdom and a means of survival.” These words are the artistic ethos of Robbins fan and acclaimed Los Angeles-based rapper Michael Eagle II, better known as Open Mike Eagle. Like a good comedian, he couches uncomfortable truths in hilarious punchlines. Like the greatest comedians, he knows when to forsake a joke entirely, when to lay pain bare so he and his audience can find catharsis and continue.

On albums like Brick Body Kids Still Daydream (2017) and Dark Comedy (2014), Eagle’s sharp humor, along with the musicality of his verses and his ear for forward-thinking production, have received praise from Pitchfork, Rolling Stone, NPR, and more. In addition to headlining solo shows around the world, he regularly performs at festivals such as the 2018 Pitchfork Festival and the inaugural Adult Swim Festival. Of late, he’s taken his passion for comedy beyond the studio. Together, Eagle and comedian Baron Vaughn created The New Negroes, a standup-meets-music variety show that explores and expands perceptions of blackness. Following months of lauded shows at venues like LA’s Upright Citizens Brigade, Comedy Central commissioned the show for a full season, which will air in 2019.

Eagle’s forthcoming EP, what happens when i try to relax, once again strikes a brilliant balance between the insightful and the comedic. Turning his gaze inward, he weighs his recent successes against the many sociopolitical failures of the present. For Eagle, this is the sound of catharsis, the music he needs to make to continue.

Make sure to stay up-to-date on all things Open Mike Eagle with his new shows. Catch “Live from WZRD” hosted by him and Dani Fernandez. Don’t miss the premiere of “The New Negroes” on April 19 with Eagle and Baron Vaughn on Comedy Central and BET.