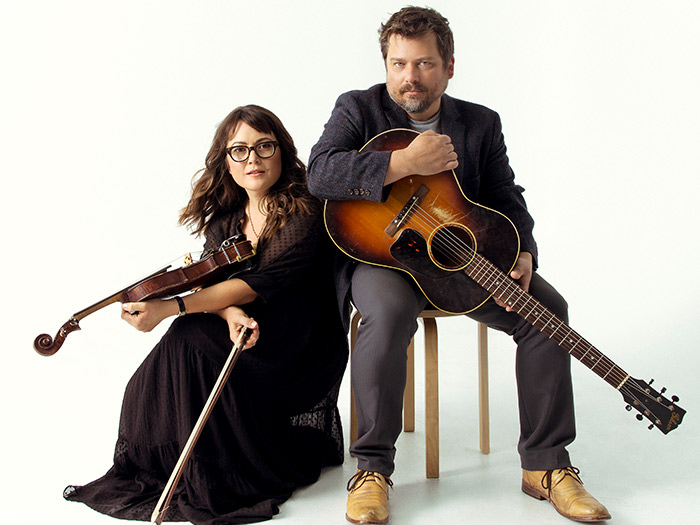 For singer-songwriter-multi-instrumentalists Sara Watkins and Sean Watkins, the Watkins Family Hour has long been an oasis from the rigors of the road, a laboratory where they can try out new material or master beloved cover songs. Their monthly show at L.A.’s famed venue, Largo, has been hailed as a convivial, communal event where they welcome an impressive array of musician friends old and new. While it’s true that fans who aren’t lucky enough to be in L.A. and score a coveted ticket can check out the proceedings via YouTube or on the podcasts the Watkins siblings have created, the fun of these evenings is really in being there as the unscripted show unfolds. The Watkins Family Hour is always full of surprises, unexpected guests, one-of-a-kind match-ups; serendipity plays as much of a role as virtuosity. Fiona Apple often joins them, and recent guests have included Dawes, Jackson Browne, Nikka Costa, Booker T. and actor-singer John C. Reilly, as well as comedians Paul F. Tompkins, Nick Kroll and Pete Holmes.

Now Sara and Sean have decided to take their Family Hour format on the road — a kind of musical pop-up shop, if you will — to clubs and concert halls around the country. To mark this undertaking, this summer they are releasing the first-ever Watkins Family Hour LP on their own Family Hour Records imprint. The album, recorded live over three days in the studio of their friend and producer-engineer Sheldon Gomberg, beautifully captures the freewheeling spirit of the shows. It features Apple and the stellar players who have become a de facto house band: drummer Don Heffington, pedal steel and dobro player Greg Leisz, bassist Sebastian Steinberg, and keyboardist Benmont Tench, each of whom take a vocal turn at the mic. The Watkins Family Hour is an all-covers affair; tracks include Sara doing Lindsey Buckingham’s “Steal Your Heart Away,” Sean essaying Roger Miller’s wistful “Not In Nottingham,” from Disney’s 1973 animated Robin Hood, and Apple singing “Where I Ought To Be,” originally performed by Skeeter Davis.