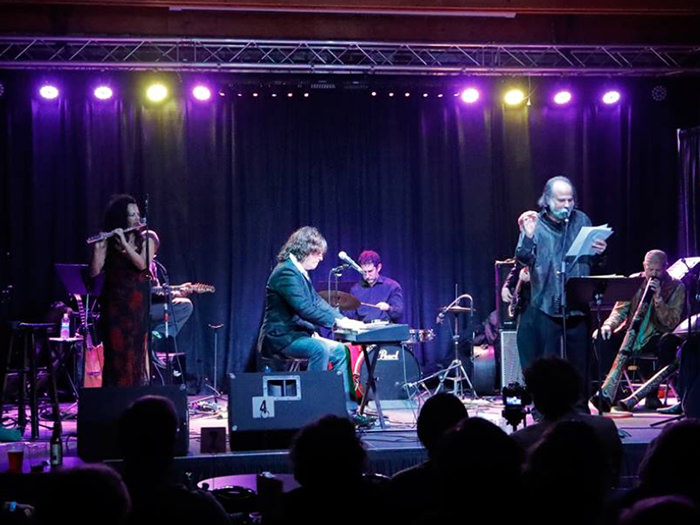 Three years ago, Michael Rothenberg, co-founder of the global arts movement 100 Thousand Poets for Change, moved to Tallahassee from California where his life’s work had been one of intimate collaboration with the original Beat writers. As a friend and editor to many of these legends, Rothenberg learned directly from the source about collaborative performance with music and poetry, and in his own work, he has pushed the boundaries of that form into a new realm and manifestation, evidenced by his work with the recently organized Ecosound Ensemble. Ecosound Ensemble includes special guest, Bob Malone, who is described by New Yorker Magazine as a “keyboard wizard,” and Tallahassee’s own Longineu Parsons. Malone, performing courtesy of FSU Libraries as a celebration of the installment of Rothenberg as FSU Libraries’ Poet in Residence, has recently sessioned for Ringo Starr and is currently touring with John Fogerty. Ecosound Ensemble also includes an all-star lineup of Tallahassee’s most dynamic musicians, Michael Bakan (drums and percussion), Brian Hall (upright bass), Vivianne Asturizaga (flute and piccolo), Joel Johnson (guitar), and Bradley White (didgeridoo). Rothenberg has been writing and performing poetry for nearly 40 years. He has published over 20 books of poetry. As recipient of the Creative Work Fund Grant he has performed his poetry with The Dirty Dozen Brass Band, Johnny Lee Schell (Bonnie Raitt), Debra Dobkins (Richard Thompson), John B. Williams (Freddy Hubbard), Joe Sublette (Taj Mahal, Eric Clapton), and Marty Ehrlich (Anthony Braxton, John Zorn).